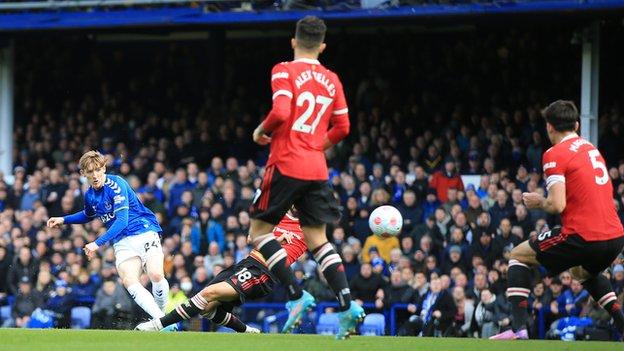 Everton recorded an all-important victory over a Manchester United side who have their eyes on their holidays in Dubai.

Manchester United began the game brightly and within the opening ten minutes, forced the first chance of the game. A set piece routine from the left by Bruno Fernandes, eventually found its way to Marcus Rashford and his effort drew a good save from Jordan Pickford.

Rashford could have had a brace minutes later. Once again Bruno Fernandes was involved in the build-up play as an in-swinging cross from the left, found Rashford with a header which was denied once again by Jordan Pickford.

Inevitably with the way the season had been going, it was Everton who took the lead in the 27h minute. Everton capitalised on a misplaced pass by Nemanja Matic with Richarlison playing the ball into the path of Anthony Gordon whose shot deflected off Harry Maguire to nestle into the back of the net.

Everton almost doubled their lead in the 36th minute through another fortunate deflected effort. Pickford punted a long ball up the pitch which the United defence were static to. Richarlison latched onto the loose ball and from about 20 yards out his deflected effort forced De Gea to tip the ball over the bar.

The second half began in the same vein as the first half with United creating the early chances. Rashford had an opportunity to connect on a wonderful, floated ball from Fernandes, but failed to do so which summed up his current form.

Chances were far and few between in all honesty. The performance from United showed much frustration throughout and in all honesty, there is no sympathy to any of these players.

Lack of effort, lack of desire and ultimately in my opinion it is going to be a monumental job for the next manager coming in.