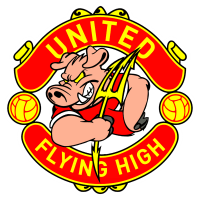 UNITED FLYING HIGH was started by Flying Pig United who’s Youtube Channel has reached over 40,000 subscribers and has over 10 million views.

This website is your daily news source for all things Man United covering all the goings on from the mens and womens teams. It gives you all the latest transfer talks and updates around the players, the team and the club in general. You can also test your knowledge with a bunch of quizzes based around the club we love.

Flying Pig – @FlyingPigUnited – Creator and owner of United Flying High, a passionate United fan since birth who is committed to covering the team he loves. He started making youtube videos about Manchester United in 2013 and has never looked back.