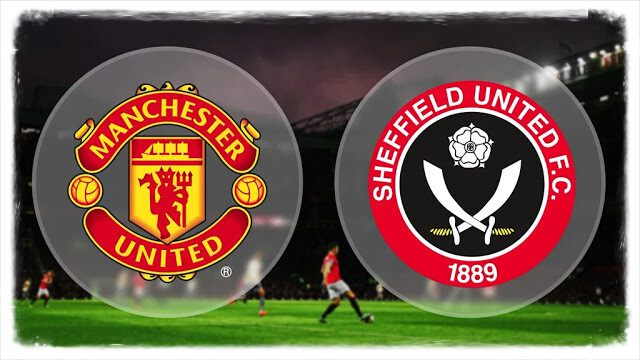 Manchester United are all set to take on fellow Champions League challengers Sheffield United in the first behind closed doors match at Old Trafford. The match is on Sky but is free to air on TV channel PICK and Sky One.

Who can ever forget the 6-goal thriller between these sides in November? Sheffield United took an early lead through John Fleck which comfortably took ‘The Blades’ into the half time break against a lacklustre United. With many fans hoping for dramatic change in the second half, they were left disappointed when Lys Mousset doubled Sheffield’s lead.

However, then arguably came the best 7 minutes of football Man United have played all season. Goals from Brandon Williams, Mason Greenwood and Marcus Rashford in just under 8 minutes turned the game on its head and gave United a shocking 3-2 at Bramall Lane. With the final 10 to play it was a job of just holding on and escaping with 3 points.

In the 90th minute, a controversial goal was scored by Scottish international Oli McBurnie which struck the shoulder of the Sheffield United number 9. VAR had a close look and decided to give the goal resulting in the game finishing 3-3.

That day was frustrating for Manchester United as overall it was a poor performance, but optimistic fans saw the good side and thought if they could play that good for 7 minutes then they can do it for the full 90.

Nobody knew the extent of that point shared but here in June we see both United’s still battle for Champions League qualification and if we get anywhere near the drama, we got at the back end of last year then we should be in for a frustrating yet thrilling game.

Ole’s selection on Friday was questionable especially leaving out Pogba and Greenwood. When those two came on, all be it a little late, they completely changed the complexion of the game. So, with that in mind, who should get the nod for this must win encounter.

David De Gea was probably the biggest victim coming out of the Tottenham draw for his error leading to the Bergjwin goal and it has created conversation about whether he is the man or not.

It’s worth remember the Spaniard has won United points a lot more than he has lost them which shows the testament of the inconsistency problem we are dealing with.

Sergio Romero is the only viable replacement right now and despite the Argentine’s patience and consistent displays when required, I don’t think it’s the right move to throw him out there in such an important game.

I say stick with De Gea who has to prove a point not only because he conceded 3 in the last meeting but because his potential replacement will be watching from the Sheff United stands, if he’s allowed.

Another area of the team that needed a look at after a shaky display last Friday.

Firstly, I have no problems with Aaron Wan Bissaka, and I don’t believe many do so that’s an obvious start at Right Back.

Left Back is where the first change comes from the game at Tottenham. Luke Shaw looked unreliable at the back and with a replacement as good as Brandon Williams, I feel Ole needs to trust the Englishman especially in this game, after one of his great displays in the reverse fixture.

The back two is a hard one and I’ve been a little harsh hear. At the end of the day Harry Maguire was at fault for the Spurs goal and with his price tag shouldn’t be making mistakes like that. However, I feel the partnership isn’t clicking at the moment, but I feel Lindelof should be benched. That seems harsh considering it was Maguire making the mistake, but I feel a combination of Maguire and Bailly will give united a sense of solidity and complete a more than capable and reliable back 4.

The most important area of the pitch is the midfield and I think most will be in agreement with what I’ve gone with.

Nemanja Matic is that player that is required to add a bit of defensive structure in the middle of the park. My opinions on Nemanja Matic has been well documented in the past.

Bruno Fernandes. A must start. Clearly.

The final part of the midfield jigsaw is Paul Pogba. His difference is evident when he came on against Tottenham and after only seeing a glioma of the magic Pogba and Fernandes can create together, you can already see they are built for one another.

First lets talk right wing. Dan James was not in the game at all last time out and needs to be benched to protect him more than anything. His replacement? The young gun who came on for him, Mason Greenwood. Nobody can deny the talent and skill Greenwood possesses and a start could really hurt Sheffield.

The left-hand side is an easy one. Rashford must start in that position as he is the only real option to lockdown that left wing.

Finally, the lead man is a 50/50. Martial misfired against Spurs and after seeing his performances pre lockdown, Ighalo is hot on his tail. With that being said, Martial has to lead the line for me. Despite his displays, Ighalo will always be a wildcard off the bench at United and what a wildcard to have but Martial needs to start to redeem himself after the non-existent performance last Friday. 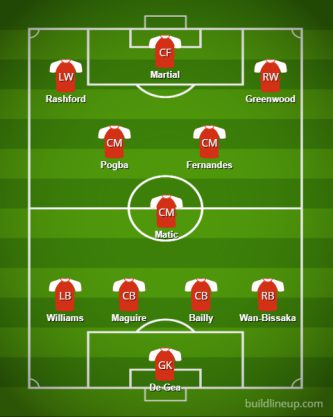 ‘The Blades are without John Egan after his red card against Newcastle and are also without keeper Dean Henderson who can’t play because of his ties to United through loan. Other than that, Sheffield United should be at full strength but with those two emissions, Manchester United can easily get at the less than full strength Blades defence.