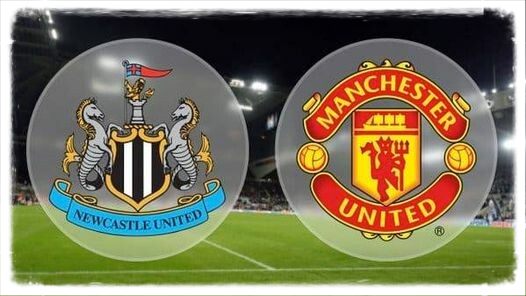 Since the 6-1 Spurs defeat it’s been a quiet affair at United if you discount a car crash of a deadline day where we spent £40m on a 18 year old that comes in January, gave a 33 year old Falcao remake £200,000 a week and a number 7 shirt he can’t even wear because of self-isolation, bought a young winger that has gone from non-existent to the next CR7 in a matter of seconds, had our captain exposed when telling Rashford to stop arguing the Martial red card, watching Eric Bailly walk off in pain for Ivory Coast, hearing Paul Pogba publicly say he wants to play for Real Madrid, looking at the prospect of Bruno Fernandes having to quarantine, having our third choice keeper’s wife slate the club for how it treats its players, having your underperforming right back reported to have receive a driving penalty for speeding and seeing the board hanging out the manager they didn’t back in the window to dry while they publicly tap up his replacement. Forget all that then it’s been a standard break for the ‘Red Devils’.

I hate to be the Mr. Doom and Gloom but the club we all love is collapsing to ruins in front of our very eyes and there is nothing we can do about it apart from 55 year old Karen who thinks she has saved Manchester United Football Club by tweeting #WoodwardOut #GlazersOut with her green and gold profile picture.

But, Man United have always been a club that appreciates its history but also looks to the future and on the horizon is our next game which is the interesting challenge of former United defender Steve Bruce’s toon army.

We’ve done enough reviewing over the break so let’s turn our heads and preview Manchester United’s must win clash at Newcastle. 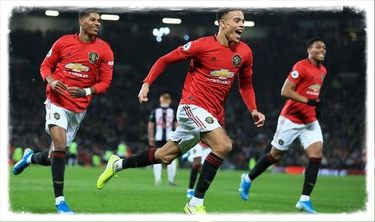 Let’s turn our clock back to Boxing Day 2019 when Manchester United went into the game against Newcastle knowing the Magpies could pull out a shock just like the shock that came from the right boot of Matty Longstaff in the reverse fixture in early October.

This time around was a very different result but an all too similar start when the same Longstaff netted top give Newcastle the lead at Old Trafford. However, Man United must have been given a comeback token for Christmas because they used it here. Anthony Martial levelled all before Mason Greenwood and Marcus Rashford saw off the game with a goal each. Martial doubled his tally to send the Magpies home sour after a 4-1 defeat.

As previously stated, this was one of the better performances from United and it came in a period that saw Ole fighting for his job and who knew 10 months later with 70,000 less fans in the ground, the situation would be the same. Ole managed to save his job against Newcastle and now he must do it all over again. 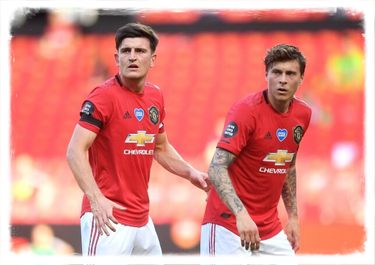 Let’s get one thing clear, Solskjaer must change the team from last Sunday. He must. You can’t lose 6-1 at home to a Jose Mourinho side and then put out the same team as nothing has happened. Yes, Ole didn’t get the players he wanted on deadline day but it will show him up as naïve if he sent the same army out for this fight.

Anthony Martial will miss this tie as he is serving a three-match suspension after his controversial red card against Spurs. Other emissions include Edinson Cavani who is quarantining after arriving from France last week. As ever, the medical twins Phil Jones and Axel Tuanzebe are absent through injury. There are also a few doubts over Bruno Fernandes after his Portuguese teammate Cristiano Ronaldo tested positive for Covid-19. It is not known whether Bruno has to isolate yet after being in close contact with CR7 but for this we will take it that he is available. Eric Bailly is doubtful as the extent of his potential injury on international break is yet unknown.

If you didn’t watch United this season and saw that David De Gea, who had his worst year in a ‘Red Devils’ shirt, had conceded 11 goals in three games then you would question him but believe it or not, not one of the goals conceded was directly his fault. Clearly, Prime De Gea would have saved some but the defence in front of him is to blame. As he’s done nothing to warrant being dropped, I would start De Gea over Henderson and Romero in this crucial must win encounter.

Now the defence. What a mess. Starting at right back, it’s either an out of form Aaron Wan Bissaka or a more than suspect Timothy Fosu Mensah. I think AWB wins the battle of the doubled barrelled surnames and gets in over TFM.

Now to the centre backs and honestly, I would much rather go to a random Sunday league game and call up two centre halves from there rather than watching a human fridge-freezer partnering and a Swedish flatpack desk as a defensive partnership. We literally have IKEA as a back two. The problem is, one has to start unless you are going to start Mengi. So, do you play a player responsible for three goals against Palace or a player responsible for several against Spurs? I’m saying Victor Lindelof is the lesser of two evils here because not only does Maguire the player need a rest but Maguire the captain too. So that means a Victor Lindelof and a less than full fit Eric Bailly partnership. Dear lord, help us.

Left back is the easiest of the back four with the great addition of Alex Telles. I know Ole likes Luke Shaw, but he must be benched to favour a much better Telles. It’s also worth pointing out at this time that under no circumstance should Ole be playing a back five against Newcastle. Just no.

Nemanja Matic gets the nod for me but the second midfielder of the two has to be Donny Van de Beek. He has been one of our better players this season and Paul Pogba has been in such poor form since the September 12th. Also, he must be punished for his stupid comments about Real Madrid whilst on French duty. Unacceptable.

As for the more attacking midfielder, it has to be Bruno. If rumours are true that Ole and Bruno has had a teenage girl like falling out, then there is a chance Fernandes won’t start. If that’s the case, then Ole has threw himself in the firing line. You can’t bench a player that single handedly got you Top 4 and saved your job. You just can’t.

Martial suspended means the attacking line needs changing. I would keep both Rashford and Greenwood with Mason playing through the middle. Rashford will find his form eventually so I am an advocate for him to keep playing and giving Greenwood the chance upfront might be a blessing in disguise. The final player in the team in unknown new boy Facundo Pellistri. This is a glorious opportunity to help get his career off to a flyer and it also means we don’t have to play Lingard, Ighalo or James which is a result in itself.

The full United team is seen below: 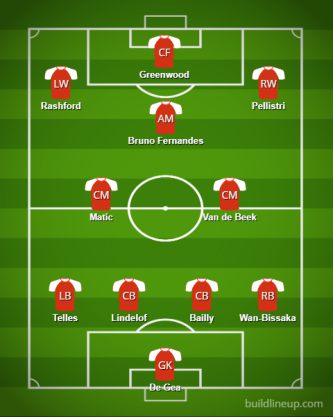 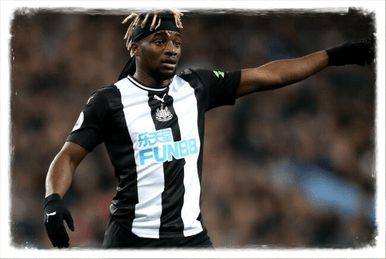 Newcastle have an injury crisis at the moment which may boost the confidence of Ole’s men. The Geordie Ghost of Manchester United’s past Matty Longstaff is unavailable through injury as is Dwight Gayle, number 1 Martin Dubravka, Ciaran Clark, Paul Dummet and Matt Ritchie.

The biggest threat is going to come from Allan Saint Maximin who has just extended his Newcastle contract until 2026. Other players of note are Callum Wilson who is enjoying free scoring form and Jeff Hendrick who has started well to life at St James’.

The predicted lineup for Newcastle can be seen below: 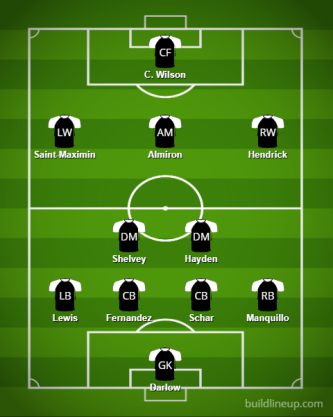 Just to serve my own mind some positivity, I am predicting a 3-1 win over the Newcastle. Hopefully, United turn up, salute at the Magpies and walk away with the luck off all 3 points.