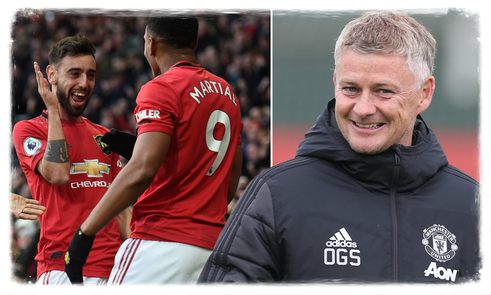 Anthony Martial, Bruno Fernandes and Ole Gunnar Solskjaer have been nominated for Premier League June awards after an undefeated month at Manchester United.

Anthony Martial and Bruno Fernandes have both been shortlisted for June Player of the Month as well as both for June Goal of the Month.

Martial’s hat trick confirming chip against Sheffield United and Man United team goal finished off by Bruno Fernandes against Brighton have both been nominated for the Goal of the Month award.

Other goals shortlisted are; Chilwell’s wonder strike against Watford, Milivojevic and De Bruyne free kicks against Bournemouth and Chelsea respectively, Pepe’s curler against Brighton, Neto’s strike for Wolves against West Ham and Fabinho’s 30-yard screamer against Crystal Palace are all up for the June award.

This is an award I don’t see either United player winning because despite both goals being great, the award usually goes to a skilful or distanced strike. That makes Fabinho or Chilwell the favourites for this award.

Meanwhile, Bruno and Anthony are both up for Player of the Month too. Both have won three, drawn one and lost none in the month of June with Fernandes scoring four and assisting one while Martial scored four and assisted zero. To make up the numbers for June, the first half of March pre lockdown has also been considered.

Four further players make up the shortlist including a Wolves double with defender Conor Coady and goal machine Raul Jimenez. Coady and Jimenez have both won four, drawn one and lost none while Coady kept four clean sheets in that time and Jimenez netting three goals.

Allan Saint Maximin, who has scored two goals with a two win and one draw record, and Danny Ings, has netted three times with a single assist in his two wins and two losses since March, complete the list.

All six deserve to be shortlisted but the favourites are undoubtably Bruno Fernandes and Raul Jimenez based on their game changing performances in each of the games.

United legend Ole Gunnar Solskjaer is also up for Manager of the Month for June which also considers March before lockdown to determine the award.

Ole has masterminded United to an undefeated month with wins against Sheffield United, Brighton and most impressively a Manchester derby win back in March. His record of winning three and drawing two is a solid record for the Manager of the Month award.

However, Solskjaer isn’t the only one with a win over Man City as fellow contender Frank Lampard beat last years Champions to gift the crown to Liverpool. Lamps is also undefeated in three games including wins at Aston Villa and a thumping home win over Ancelotti’s Everton.

Steve Bruce and Nuno Espirito Santo round off the shortlist. Bruce has won two and drawn one in this time period including wins against Southampton and Sheffield, wins that could take Newcastle past relegation and into the Premier League next season.

Santo has won four and drawn one for the compound month including big wins against West Ham, Aston Villa and Tottenham. These wins have continued Wolves persistent knock on the door of Champions League places under the Portuguese man.

There is no real favourite for me, but I can see either Solskjaer or Santo picking up the award.

To vote for all three June awards, click here.