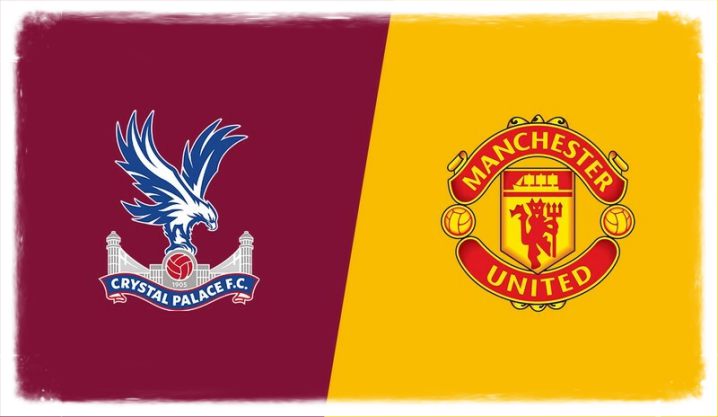 Manchester United fly down to London to face ‘The Eagles’ at Selhurst Park in much need of a win to return to the tracks of Champions League qualification.

On paper, this is the most inform team travelling to one of the most out of form with Palace losing their previous five and United unbeaten in the last 18 in all competitions. However, post lockdown form doesn’t count for much and the mentality of United may be weakened after a heart-breaking late equaliser last time out against Southampton.

To flip the coin, it is also the most experienced manager in the league against one of the most inexperienced. Can Ole Gunnar Solskjaer learn anything from Roy Hodgson and can The Norwegian walk away from the Palace with all three crown jewels.

The last meeting will not be a happy memory for ‘Red Devil’ fans. Jordan Ayew opened the scoring in the 32nd minute and set Palace up to defend that one nil away lead but it took until the 89th minute for Dan James to equalise and you would think that would confirm United taking a point away from the game. United were all ready to walk away slightly disappointed with only a point but Dutch international Patrick Van Aanholt had something to say about that as a lapse of concentration allowed the Palace man to fire past De Gea and send ‘The Eagles’ home with all three points.

In hindsight, you can look back at this game and pinpoint it as a match that best defines United’s up and down season and best defines why United aren’t comfortable in the Top 4 just yet.

Tonight, is the night where United can write the wrongs of late August and walk away with the dub. This could prove to be the most important game in the last seven years for Manchester United.

Crystal Palace will more than likely see the first starting XI changes for United in five matches. Some players walked off with knocks against Southampton and because of the quick turnaround between games, expect some tweaks to the team with an FA Cup semi final against Chelsea on Sunday to also consider.

Phil Jones and Axel Tuanzebe are the only two United players that are confirmed out of this match as they have been all season. Both Luke Shaw and Brandon Williams are doubts due to injuries sustained against ‘The Saints’, however both arrived to training at Carrington looking ready to go. The only other doubt is Mason Greenwood after a controversial stomp on the back of the ankle by Oriol Romeu in the previous match.

This could be a blessing in disguise for Man United and force them to make changes in a busy week for ‘The Red Devils’.

Despite some projected changes to the team, one thing that should remain the same is the formation. United are still on hot form even after the Southampton draw at Old Trafford and a big part of that is the formation so I don’t see any reason to change that to incorporate certain players. 4-3-3 is the way forward for Solskjaer and United.

This may be the easiest choice in the entire team. Sergio Romero should and probably will start in the cup against Chelsea which gives De Gea a much-needed rest. With that in consideration, David must start against Palace. Despite his poor form, De Gea is still a good shot stopper and with the likes of Zaha and Ayew to contend with, the Spaniard is the right choice to go in between the sticks for United.

Aaron Wan Bissaka has been poor in recent matches and has struggled to find his feet but I still believe the former Palace man should start for that exact reason. Wan Bissaka knows a lot about this Palace team and will have to defend against the skilful Zaha. Pace is required to counter Wilfred so why remove a pacey right back who knows all about the Ivorian. You wouldn’t.

I felt sorry for Victor Lindelof against Southampton because despite playing a big part in the late equaliser, his overall game was actually very good. One mistake shouldn’t take from the rest of the game, but it did. Lindelöf’s confidence must be low so playing him against Palace will only help rebuild that confidence. Lindelof starts.

As for his partner, my slow building agenda towards Harry Maguire is showing as I’ve opted for Eric Bailly. I know Bailly hasn’t been at his best since the restart when he has been given the opportunity, but I think after Southampton Harry Maguire needs a rest and then can return to not just the team but captain duties against Chelsea on Sunday.

Left back is an interesting one as that is the most injury hit position. Both seem fit enough to start but if there weren’t then Dalot would have to fill in. Despite driving to Carrington, the other day, Luke Shaw’s ankle knock should be enough to at least give him a break and give Brandon Williams a go. Williams only suffered a cut so should be in better condition than Luke Shaw to start.

Nemanja Matic has been a key player for United since the restart but after going the full distance against Southampton just two days ago, Matic deserves a break. Deciding who to replace him is a 50/50. Fred was performing well pre lockdown but since getting a chance after the restart, he has yet to show those levels. Mctominay is in a very similar to Fred but I’m going for Scott. He is more of a defensive option than Fred so that is the better option not only for the defence but for the other two midfielders.

Speaking of those midfielders, one has to be Paul Pogba. He didn’t shine himself in the brightest of lights against Southampton but was brought off the pitch relatively early into the game so should be fit enough to start against Palace. There are very few players better at turning defence into attack than the World Cup winner and that asset is crucial in beating a solid Palace team. He has a mistake in him, but he also has the ability to change the game in a heartbeat. Must win game must see a match winner in Paul Pogba start.

No prizes for guessing who starts in the more advanced midfield role. He may have been quiet during the Southampton game but even in a so-called quiet game, Bruno Fernandes recorded an assist. Not many have had better starts in the Premier League than Fernandes and that is why he has to start. Without Bruno, the game becomes that much harder for United so despite the tight and compacted schedule, our Portuguese Magnifico is a must in the starting line-up tonight.

Mason Greenwood being a doubt for this game will cause a few headaches for manager Ole Gunnar Solskjaer and worries for ‘Red Devil’ fans. With Greenwood out, or at least on the bench, this makes way for the man that scored the goal in the last meeting, Daniel James. Of course, it would be better to have Mason but with the congested fixture list, it’s not worth risking a doubtful Greenwood and plus James’s pace and energy could be useful for this game so let’s hope he finds his old form in this vital game.

Rashford was one of the better players against Southampton and is finally hitting strides on the pitch. His confidence will also be sky high following the announcement that he will be awarded a doctorate from the University of Manchester. He is loving life and despite rumours of him departing to PSG, I’m sure he is focused on the job in hand and being an academy graduate, he will know the importance of this match for his boyhood club.

Man of the Match last time out Anthony Martial had a great game and was showing signs of being a top-class striker. Chelsea on Sunday is a crucial game in its own right but I have a feeling Ighalo will start that game so I will go with the inform Martial. When he’s hitting the right notes, he’s smashing goals in left right and centre and grabbing a couple of assists as well. Being on the same number of goals than Marcus, Martial will be more determined than ever to one up his United teammate in the name of friendly competition. The Frenchman is again my Fantasy Football captain so let’s hope for another elite performance from our lord Toni. 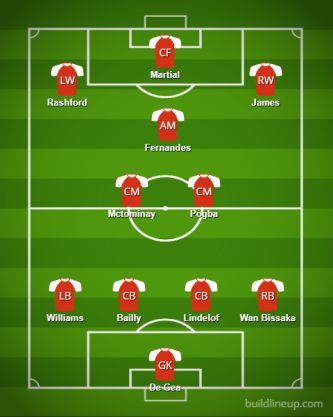 The main headline from the Crystal Palace camp is the emission of defensive legend Gary Cahill. He was a crucial player before the injury against Chelsea and will be sorely missed by Roy Hodgson’s team.

Palace are also without striker Christian Benteke after getting a red card post final whistle against Aston Villa last time out. He has been a regular starter for ‘The Eagles’ since the restart so will be a big miss in this game.

Palace are also without James Tomkins and Jeffery Schlupp due to respective injuries.

The likely Palace line-up is shown below 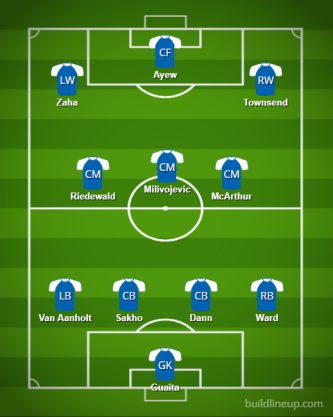 On paper, this should be an easy prediction but after the uneasy performance from United against Southampton, doubts are beginning to creep in. Still, I’m confident that United will bounce back and come out swinging and proving a point. Yet, not as convincing as previous matches, I’m going for a win for ‘The Red Devils’ and also a confidence boosting clean sheet. Come on United.

What do you make of the upcoming game? Leave your thoughts below. 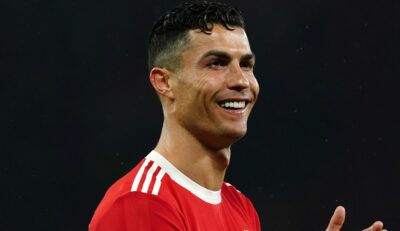 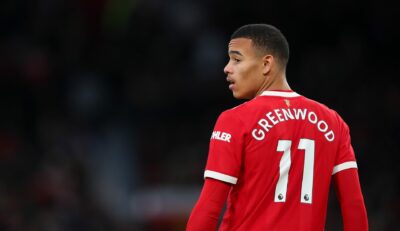 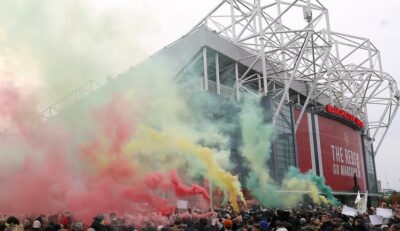 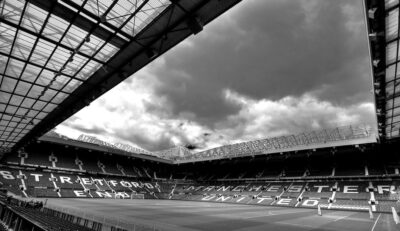 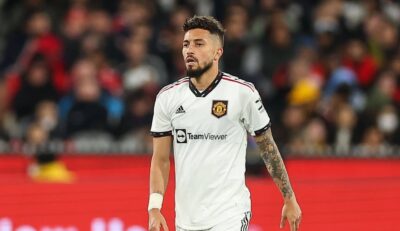